A group of students from a small rural Northland kura used online learning tools to effect real-life change – and it took them all the way to Parliament. 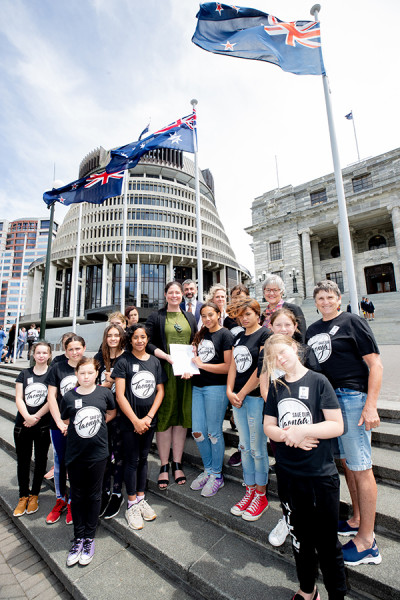 Students from Hikurangi School, with teacher Helen Moore present their petition to Willow Jean Prime, Eugenie Sage and staff on the steps of Parliament at the end of last year.

The students in a Year 7 and 8 all-girls digital classroom at Hikurangi School in Taitokerau have become passionate allies of a native freshwater mudfish. Their teacher, Helen Moore, says her class discovered the plight of the native black mudfish/waikaka that live in their ‘backyard’ and decided to do a petition.

Their online petition, which calls for the government to protect the habitats of the native black mudfish outside of Department of Conservation (DOC) reserves, got almost 650 signatures.

The Hikurangi Swamp was the largest area of wetland in the Southern Hemisphere before it was drained, and now the unique native mudfish is struggling to survive.

In the petition’s accompanying video, the students say the black mudfish “is so unique and amazing because it can survive out of water sometimes for several months”. 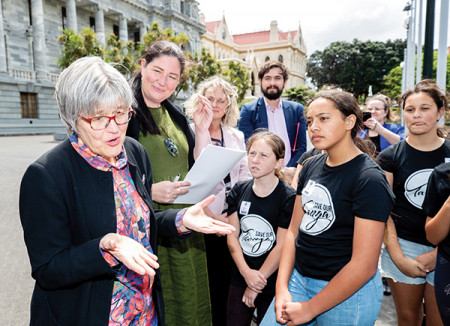 “This petition was the culmination of their year’s work,” says Helen. “The girls have researched and spoken to experts and in doing so, have found out more about the taonga which is the mudfish and was so important to their iwi in the past.”

The group of 14 students and Helen presented the petition to Labour list MP Willow-Jean Prime on 19 November 2019. The next day they were taken on a tour of Parliament and heard their petition read out in the House.

Taking it in stride

Helen says presenting the petition and meeting Willow-Jean, Eugenie Sage (Associate Minister for the Environment), Trevor Mallard (Speaker of the House) and Duncan Webb (MP, Chairman of Environment Select Committee) made the experience very real, and she was impressed by the politicians and their interest in what the tamariki had to say.

“After we got back, we had an email from the environmental select committee saying they are going to consider the petition, and do we have some evidence to back it up.

“So we have been brainstorming all the reasons why we think the mudfish should be protected and thinking of all of the people who can provide support and their expert opinion to back us up. We may need to make an oral submission by Skype this year. This has extended the learning even further,” Helen explains.

After a year of cross-curricular activities, the girls had so much knowledge that when visiting Te Papa on their trip, they pointed out there were no freshwater native fish in a display of endemic plants, fish and animals.

“They found a mudfish in a bottle and there was no information about it, so the girls have decided they are going to put down everything they know about mudfish and send it to Te Papa,” says Helen.

The project has encompassed cross-curricular learning including strands such as science, research, writing and learning to articulate their ideas through oral presentations so the girls could confidently talk to media, members of the public or politicians.

“Even though the girls are from a rural Northland school, I try to get them to realise they have value and can make a difference – they don’t have to accept the status quo,” says Helen.

“The greatest value to me is they are beginning to realise they have a place in society. They have followed it through from Hikurangi Swamp to Parliament and it’s still going,” she says. “I have been quite impressed with the way they have taken it in their stride.” 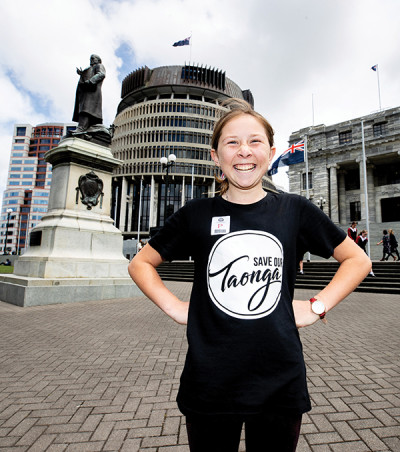 Ashley was thrilled to visit the heart of our democracy when she travelled from Northland with her school to present a petition to Parliament.

Feel the fear and do it

Helen says the year-long project has been demanding but the class has received support at every level, from the community who helped fundraise for the Wellington trip, to experts who shared their knowledge. Relationships have also been built and strengthened with iwi, DOC and the regional council.

“We have found there are people out there willing to help – experts are always willing to help and get excited when kids want to know things. As long as you are happy to go with the flow and let it gather its momentum, it’s not a difficult thing. Feel the fear and do it anyway!

“Everybody has been really positive, and we have had some amazing encouraging comments from people who have signed the petition. It just brings it home to the girls that they are doing a good thing,” says Helen.

In 2018, Helen Moore was a recipient of the Royal Society
Te Apārangi’s Science Teaching Leadership Programme. She spent six months with the Northland Regional Council and was able to get involved in tasks such as monitoring coastal water quality in the Bay of Islands and habitat mapping using drones. It was during this placement that she learned about the plight of many of our native freshwater fish.

“I did some fish surveys and I didn’t even know we had so many freshwater fish other than inanga and tuna (eels). I learned how their habitat is shrinking and the idea was in the back of my mind that we could do something about this, or we could look at freshwater fish when I went back to the class,” she explains.

With a background in science, Helen retrained as a teacher and recently finished a postgraduate qualification in science teaching and leadership. She says the Royal Society programme, which included leadership workshops, increased her confidence in her ability to lead science in her school.

“The big thing was having that six months out of the classroom fully immersed in a science environment. I learned how to get students to think like scientists through making observations, finding the evidence, drawing conclusions. I am now getting children and teachers to recognise the science they are doing all the time.

“I hope I will be able to contribute to our tamariki learning to become critical thinkers and effective citizens through science and technology,” she says. 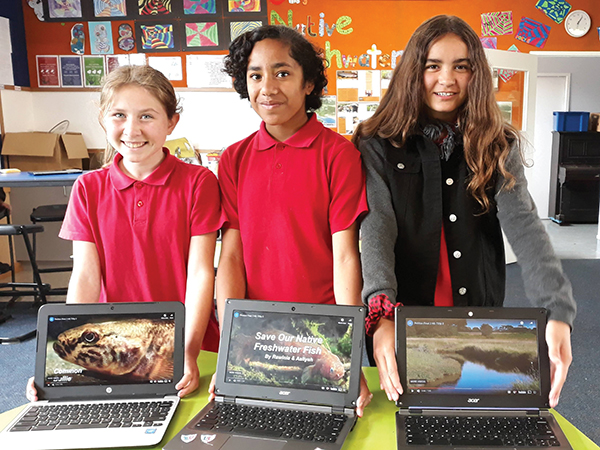 Students from Hikurangi School researched a kete of knowledge about Northland's endemic mudfish. Ashley, Aaliyah and Dahlia show some of their findings.

What have you learned from this project?

Lucy (11): That mudfish are very unique. They can slow down their metabolism in summer when the sun dries out their habitat and burrow into the wet mud. They can survive out of the water for several months as long as their skin is kept moist. In our Hikurangi Swamp there is the black mudfish which are slowly becoming endangered because of the many threats to their habitat such as drainage, pollution of waterways, and competition from pest fish.

Aaliyah (12): In New Zealand we have 56 native freshwater fish species. Five of these are mudfish. Over 75 per cent of our freshwater fish species are endangered and if we don’t do something now, by 2050 they will be extinct. We learnt how to use social media and the change.org platform to make our petition reach all over the world.

Ashley (12): When you hand in a petition to Parliament, it goes to a Member of Parliament who takes it to the Tables Office who makes sure it is okay. Then they give it to Clerk of the House who reads it out at Question Time in the House. Then the petition goes to the relevant Select Committee who decide whether it is good enough to become a law. We have to provide evidence to the Select Committee to say why we want protection for our mudfish.

What part of the project did you enjoy the most?

Riley (11): Watching the petition being read in the House at Question Time and knowing that it is going to the Select Committee and Duncan Webb is taking us seriously – they didn’t treat us like kids.

Aaliyah (12): I have enjoyed learning about the black mudfish because I didn’t know we had freshwater fish and that the mudfish are so unique and struggling to survive. I think I am a bit of an expert now and know more than my whānau about our mudfish. I really enjoy that I am able to help save them.

Has this inspired you to get involved with other or the same environmental causes?

Ella (12): Yes, because I don’t want so many of our native freshwater fish to be gone because they are only found in New Zealand and they are really hard to find. I want to carry on with this project next year.

Jordan (12): Yes, because in the future we might not have the environment unless kids my age change what is happening now.

The study of mudfish and the resulting petition has strong links to two main strands in the Science Learning Area:

The overarching nature of science strand is where students learn what science is and how scientists work. They develop skills, attitudes and values to build a foundation for understanding the world and come to appreciate that scientific knowledge is durable, but also constantly re-evaluated in the light of new evidence. They learn how scientists carry out investigations, and that science is a socially valuable knowledge system. They learn how science ideas are communicated and to make links between scientific knowledge and everyday decisions and actions.

The living world strand is about how living things interact with each other and the environment. Students develop an understanding of the diversity of life and life processes, of where and how life has evolved, of evolution as the link between life processes and ecology, and of the impact of humans on all forms of life. As a result, they are able to make more informed decisions about significant biological issues. The emphasis is on the biology of New Zealand, including the sustainability of New Zealand’s unique fauna and flora and distinctive ecosystems.

These science strands have strong links to three key competencies: Thinking; Relating to Others; Participating and Contributing.

The programme gives students in lower-decile Northland schools equal access to online learning to empower them to become actively engaged digital learners. This is done in two ways: by making personal-use devices affordable for every participant – whānau who purchase a Chromebook through the programme can pay off the interest-free loan when they are able to. Money is then reinvested to buy more Chromebooks for the next round of children. Secondly, the trust employs a dedicated digital immersion(external link) facilitator, Beth Lamb, who supports teachers in their professional development.

Sign up now for the Education Gazette newsletter here(external link)

Last reviewed: 22 April 2022 Has this been useful? Give us your feedback